Cycling routes in South of France

Bike itinerary - Fronton and its surroundings

Bike itinerary - Agde and its surroundings

Bike itinerary and good deals on the Canal du Midi 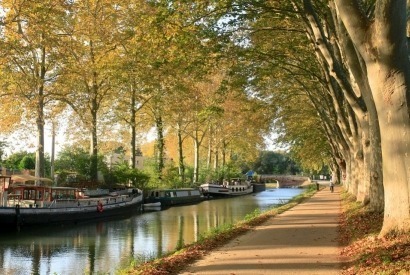 If you like to discover new places, take the time to stroll and visit; we recommend 6 days to explore the Canal du Midi.
A week to discover, at your own pace, the beauty of the locks, barges and landscapes surrounding the Canal, from Toulouse to Sète.

Sometimes sunny or shady, along the vineyards or under the lush vegetation; we invite you to discover the Canal du Midi and we suggest you discover some emblematic places through the following itinerary:

Toulouse is a city that can be discovered by bike. There are many cycle paths that allow you to discover the main districts of the city while visiting monuments such as the Capitol, the Saint-Sernin basilica, the Jacobins convent...

After discovering the pink city, we invite you to leave along the Canal du midi.
Our Paulette - Toulouse agency is located opposite the Canal du Midi. You are a stone's throw from the cycle path that leads you to Castelnaudary.
On your way you will pass some locks under the freshness of the plane trees. From Toulouse to Port Lauragais, the tarred Greenway reuses the Canal's towpath.
1h30 from Toulouse by bike, you can take a break in the charming village of Montesquieu-Lauragais, with its typically Occitan architecture. Stop in its church, and from the top of its "wall bell tower", admire the view of the surrounding countryside.

Lunch in front of the lock at the Port of Gardouch, before leaving for Port Lauragais.
Stop there to visit the "Maison de la Haute-Garonne" which offers an exhibition on the Canal du Midi and its secrets. The visit is free of charge.

More than a small ascent to reach the Naurouze Threshold (watershed between the Atlantic Ocean and the Mediterranean Sea and the highest point of the Canal du Midi).

Once this stage is over, you will only have about an hour left before reaching Castelnaudary.

We recommend the restaurant "La Maison du Cassoulet" to taste the dish that made Castelnaudary famous.

After visiting Castelnaudary and contemplating the reflections of its houses on the water by the quays, head back along the Canal.

Take the time to watch the barges pass through the many locks.
The path is not paved. You will pass over roots but the towpath remains relatively flat.

Little by little, the red brick gave way to white stone, the fields of crops were replaced by vineyards.
You can take a detour along the cycle path to Bram: this is a typical example of the old medieval villages of the Aude called "circulades".

After 37 kilometres of bicycles, you will arrive in Carcassonne: the beautiful medieval city that dominates the Aude valley!
Enter its fortified enclosure to lose yourself in the middle of the narrow cobbled streets.

Visit the castle, the basilica, retracing the history of the city.

Leave Carcassonne via its bastide, which is also worth knowing.

We advise you to stop a few kilometres further to have lunch at the Port of Trèbes in the restaurant "Poissonnerie Moderne Sylvie" located on the waterfront.
Visit the village church dating from the 12th century.

You will then pass through many vineyards to reach Homps.
The path is more rocky on this part and has little shade. Perhaps the opportunity to stop in Puichéric, refresh yourself by enjoying an afternoon kayaking on the Aude.

On this stage, you will encounter fewer locks than in the previous days but the scenery will be just as beautiful.
Stop to visit the "granary of the winegrowers" of the Château de Ventenac Minervois from where you will have a beautiful view of the Canal.

Then stop at the Port du Somail to take some pictures and have lunch in front of the row of barges moored.

A few minutes after riding your bike again, be careful to continue along the Canal du Midi and not to turn right (unless you want to join the Canal de la Robine which leads to Narbonne).

You have about 45 minutes left before reaching Capestang.
On Tuesdays and Thursdays evenings, at the Port du Village, wine and local produce tastings await you.

Don't miss climbing to the top of the huge Collegiate Church, which overlooks the whole city and offers a breathtaking view of the region, before you leave.

Leaving the village behind, you will come across the village of Poilhes la Romaine and the Oppidum d'Ensérune; sites that bear witness to Gallo-Roman history.

At the gates of Béziers, you can admire the 9 locks of Fonseranes, which in reality form a single lock with 8 basins so that the boats can descend a 21-metre slope with a gradual gradient.

The discovery of Béziers is strongly recommended. We invite you to discover its narrow streets, its Saint-Nazaire cathedral and the view of the Pont-Vieux from the top of the city.

The landscape is changing once again. You will discover the Languedoc coast, with its flat areas and ponds.
When you arrive in Agde, you will not miss to cross a unique lock: the round lock before reaching the city.

Stroll through the pretty town of Agde, before leaving for your last stopover, which will be peaceful.

More than an hour of cycling along the Canal, before arriving in front of the Thau pond.

You will walk along the latter and can admire the Mediterranean Sea behind the immense beaches of Sète.

If you still have some strength left, climb to the top of Mont Saint-Clair where a splendid panoramic view of Sète and the Mediterranean awaits you.

As you pass in front of the port, a multitude of trawlers and fishermen will welcome you.
Then stop at Les Halles to taste specialities from the Sète sea.

Finally, walk along the canals towards the Toyota agency. You will admire the houses and fishermen's huts with their colourful facades before finishing your escapade.