4 anecdotes about the construction of the Canal du

Organizing a bachelor or bachelorette party by bik

Paulette's tips: the Vélodyssée, from Nantes to Bo

6 women who made their mark on the world by bicycl

4 anecdotes about the construction of the Canal du Midi 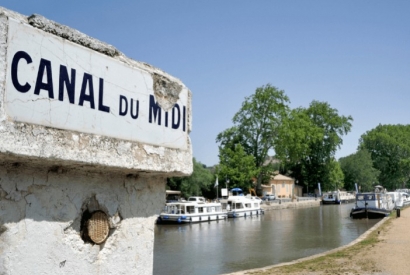 The Canal du Midi is one of the most remarkable French constructions ever created and still in operation. Connecting Toulouse to the Thau Lagoon, near Sète, it measures more that 240 kilometers. Here are the dates to put it in context: work began in January 1667 and the canal was inaugurated on May 15, 1681. The opening of the traffic took place in July 1684.

The water supply of the Canal du Midi

Since the classical Antiquity, several projects to build a canal linking the Atlantic Ocean to the Mediterranean Sea have been considered, but never realized. Indeed, this represented a real economic and political stake: such a canal would avoid ships to bypass the Iberian Peninsula. But the projects were eventually abandoned because they were often more utopian than feasible. The cause: the water supply of said canal. The systems of diversion of the rivers of the Pyrenees imagined were impossible to implement.

But in 1660, Pierre-Paul Riquet, farmer of Languedoc, found the solution to the irrigation problem of the future Canal du Midi. Despite his lack of technical training, he experimented and observed the terrain and, thanks to his knowledge of the hydrography of the Montagne Noire, developed an ingenious irrigation system that allowed him to collect the water from the mountain in one of the reservoir dams and then channel it to the Naurouze sill through gutters.

As you can see, the Naurouze threshold is an essential stop on your cycling tour along the canal.

Yes! You read it right! The Canal du Midi should have passed near the old ramparts and boulevards of the hypercenter of Toulouse: the Lazare Carnot and d'Arcole boulevards and the Saint-Etienne rampart street. Although Pierre-Paul Riquet obtained the approval of the Parliament of Toulouse and the States of Languedoc, he had to face the opposition of the Capitouls, who ruled the city.

Officially, the refusal was due to the apprehension of flooding of the city. In reality, the Capitouls were angry that the canal was beyond their jurisdiction. The Canal du Midi and its banks were a private seigneury: that of Riquet and his descendants, by order of the King. They therefore considered the project as a loss of power and authority.

The Capitouls then ordered that the canal pass further to the limit of the jurisdiction of Toulouse, where their authority no longer applied. This led to the expropriation of farms.

The first route of 1681 avoided Carcassonne, probably for financial reasons. The Canal du Midi followed the Fresquel river, several kilometers from the city. It was not until 130 years later, on May 31, 1810, that the new route allowed the Canal du Midi to enter Carcassonne.

The tunnel of Malpas built in all discretion

When the construction of the Canal du Midi reached the hill of Ensérune, Pierre-Paul Riquet was not at the end of his troubles. He had to deal with hard ground and a very crumbly sandstone mountain, prone to landslides. The minister Colbert was quickly alerted to the situation and the work was interrupted. The gallery had just been blocked and the construction site moved. Riquet's detractors were ecstatic as the project was threatened.

The royal commissioners came to visit to decide on the future of the Canal du Midi. The Chevalier de Clerville, Louis XIV's architect, advised Riquet to cross the Aude, which would have required the interruption of traffic on the river.

Then victim of a plot, Riquet asked Pascal de Nissan, master builder, to continue the work in secret, despite the risk of collapses. In less than 8 days, the test tunnel was pierced. Riquet succeeded in convincing the intendant to continue the project. The work lasted more than 6 months. The tunnel was completed in the spring of 1680, thus avoiding the need for yet another lock.