5 original activities on the Nantes-Brest canal

6 Loire castles to see between Nantes and Tours

5 anecdotes about the Tour de France

Discover Argelès-sur-Mer and its surroundings by b

Is cycling with your dog possible?

5 anecdotes about the Tour de France 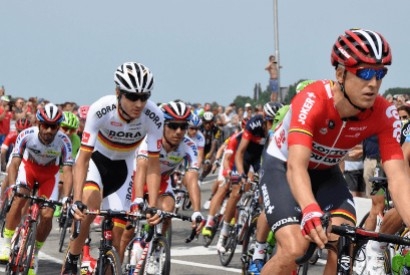 As the start of the 2021 Tour de France is about to be launched, we present you 5 anecdotes about this famous cycling event.

Top start outside of France

In 2021, the Tour was supposed to start from Copenhagen in Denmark. But because of Covid and following the postponement of Euro 2020 soccer tournament where the Danish capital is host city, the latter has exchanged its place with Brittany, designated as the launch pad of the Tour 2022. In 2023, the Tour will start from Bilbao, Spain!

But why start the Tour de France outside France? First, it is an opportunity to strengthen ties with international spectators and also a publicity coup for cycling's flagship event. The organization of the departure outside of France also includes an economic stake for the organization of the Tour because the entry fee is higher for foreign cities. In return, the latter benefit from the very important media impact.

The protocol of the event distinguishes 2 departures: one is called "fictitious" and the other "real". The first one is usually given in town and marks the beginning of a parade of a few kilometers. Under the encouragement of the public, the runners advance at a moderate pace. Once on the outskirts of the city, the real start is launched and the runners can accelerate, break away and start to separate. This is the start of the actual race. Contrary to the fictitious start, the signal for the real start is very codified, remaining the privilege of the race director.

The stage of the assassins

On July 21st 1910 at 3:30 am, the start of the 9th stage is given. It will go down in the history of the Tour de France as one of the most difficult stages ever run. In total, it is 326 kilometers through the Pyrenees and more than 5,000 meters of positive altitude difference that the riders will have to cover, passing through the Peyresourde, Aspin, Tourmalet, Soulor, Aubisque and Osquich passes to finish. Octave Lapize, crossed the Aubisque pass on foot. Once at the top and despite his exhaustion, he turns to the organizers of the Tour and shouts "You are murderers! ". He eventually won the stage and arrived in Bayonne after 14 hours and 10 minutes. Finally, only 41 riders out of 110 will finish the stage.

He won his first Tour with a lead of 17 minutes and 54 seconds over the runner-up, Roger Pingeon. A lead that he forged in large part during the 17th stage between Luchon and Mourenx on July 15, 1969. He came to the start line with 4 stage victories to his credit, out of 6 in total. He wore the yellow jersey and was 8 minutes and 21 seconds ahead of the second place in the general classification. But he asked his team to speed up. He overtook his teammate, the Dutchman Martin Van Den, and passed the Tourmalet pass in the lead. He continues alone for 140 kilometers, until Mourenx where he arrives with 7 minutes and 56 seconds ahead of the second.

On July 23, 1989, the Frenchman Laurent Fignon lost the Tour de France to the American Greg LeMond during the last stage of the Tour. We explain. Laurent Fignon was wearing the yellow jersey, so he was in first place in the general classification with a 50 second lead over Greg LeMond. During the last stage, a time trial between Versailles and Paris, the American rider caught up with the French and even beat him by 8 seconds, placing him on the highest step of the podium! 8 seconds that will remain forever engraved in the memory of Laurent Fignon, who had won the Tour twice in 1983 and 1984.

Are you constantly looking for new adventures? Stay connected!