5 Breton towns to discover by bike on the Nantes-B 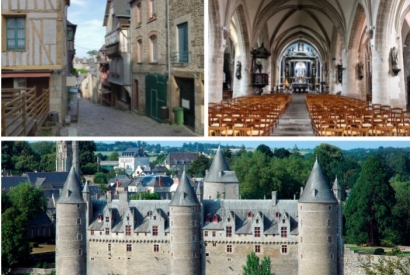 You decide to discover the Breton lands and you are going to travel the many kilometres of the Nantes to Brest Canal. Paulette suggests 5 Breton towns to discover along this tedious project initiated by Napoleon Bonaparte. You can visit by bike or you can take your time to wander through the narrow streets of the towns, it's up to you!

Classified as a "Petite Cité de Caractère de Bretagne", Malestroit is located between La Gacilly and Ploërmel and is crossed by the Nantes-Brest Canal. During your cycling tour, stop in this ancient fortified town full of history. In 1343, one of the peace treaties of the Hundred Years' War was signed here! In addition, its narrow streets with half-timbered houses are full of small traders and craftsmen who take part in the European Crafts Days and allow the town to keep its dynamism.

The key points of the town :

Come and stroll through this other "Petite Cité de Caractère" which is well worth a visit ! On the banks of the river Oust, this town was built around its gothic style castle which dominates the village. Still inhabited today by the descendants of the Rohan family, come and take a walk in the gardens of this castle with its imposing towers! But the city is not only about its castle, but also about its suburb, notably the remarkable Sainte-Croix district with its timber-framed houses. You can also take the "water route" organised by the town. This is a fun and educational tour that allows you to discover the charming places in the city, as well as the water and light effects.

The must-see points of the city:

This charming town is also worth a visit. Visit the imposing medieval castle of the Rohan family, built in the 15th century, and wander between the medieval streets and the Napoleonic facades which were the result of the great urban projects of the Emperor Napoleon, who even gave the town its name of Napoleonville for 10 years. You can also wander through the narrow streets of the town where leather and cloth were made. The countryside around Josselin is also worth a visit. Indeed, there are dozens of chapels with panelled and painted ceilings. The Sainte-Noyale chapel is particularly worth a visit and regularly hosts exhibitions.

The key points of the town :

Between land and water, come and discover Redon, surrounded by the Vilaine, the Aff and the Canut, you can then discover the marshes by boat. The town has a lot of bridges and collects, via the canals, a third of the water of the whole of Brittany! The old town was built around the monastery and the abbey, which was the most important in Brittany in the Middle Ages, was destroyed several times. You can discover the surrounding countryside by bike thanks to twenty or so loops which allow you to discover the surroundings of Redon, notably Saint-Vincent-sur-Oust, Peillac or Plessé. In any case, its proximity to the Nantes-Brest Canal makes it easily accessible by bike for families. From May to September, the town even organises a bike raid from Redon to Ile aux Pies.

The must-see points of the city:

Famous for its fortress (the Château de Groulais) which belonged to the Clisson and Rohan families, Blain was then a Calvinist town before housing the Princess of Greece in the 20th century and then being occupied in turn during the Second World War by the Germans, the British and the Americans. Bordered by hedgerows and meadows, the village can be visited by boat or canoe, where you can leave your bike for a while before returning to the Canal de Nantes à Brest.

The key points of the town: