6 Loire castles to see between Nantes and Tours 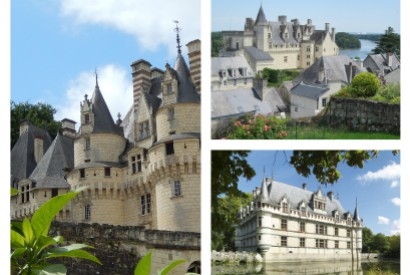 On the occasion of the International Day of Castles on Monday 19 July 2021, Paulette would like to introduce you to the castles that you will come across during your cycling trips between Nantes and Tours. We have chosen to present you only 6 of them on this itinerary, but you will find the complete list at the end of the article!

Discover the spirit of Sleeping Beauty in the castle! Charles PERRAULT's famous tale was inspired by the castle of Ussé to create the castle of Princess Aurora! But that's not all, two mummies straight from Egypt were found in a niche in the gardens of the castle of Ussé! Offered in 1631 to the lord of Ussé, these two 400-kilogram sarcophagi arrived on a camel and then by boat, and are now in the Louvre Museum. They have long been an attraction in Touraine!

The castle of Langeais

It was in the castle that the union between France and Brittany took place after more than 1000 years of independence! The royal wedding between the French king Charles VIII and the duchess Anne of Brittany took place in the castle. Today, the wedding of 6 December 1491 has been re-enacted in the Château de Langeais, and you can experience it as if you were there! Take the opportunity to watch the castle drawbridge go up, one of the only ones still in operation!

The last of the great castles built along the Loire during the Renaissance, the Château de Villandry is renowned for its gardens spread over four different levels where the boxwoods represent musical symbols, butterflies, allegories of love and much more. Vegetable garden, labyrinth, ornamental garden, orangery and clementine trees...come and discover these gardens where each year 30km of boxwoods are pruned and 100,000 flower and vegetable plants are planted!

Nestled in one of the most beautiful villages in France, the Château de Montsoreau overlooks the Loire. In addition to a breathtaking view from its terrace, discover the world's largest collection of the British collective Art et Langage in the castle! If its name rings a bell, it is also because it was made famous by Alexandre DUMAS' novel "La Dame de Monsoreau"!

"A faceted diamond set by the Indre." This is how Honoré de Balzac described the Château d'Azay-le-Rideau, with its view of the water mirror of the château, which is reflected in the water that directly borders the foundations of the château. Come and discover this exceptional viewpoint, but also the 8-hectare park adorning the castle with its historical decorations retracing 5 centuries of history!

I didn't know that.

I was just telling my friend about that.