> Blog> Miscellaneous>Cycling in the movies: the must-see films 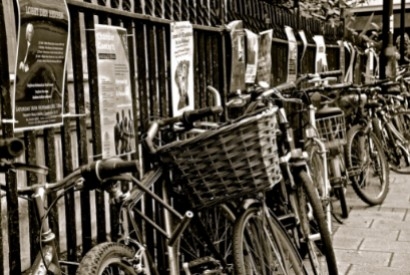 It's not just in Yves Montand's famous song that the bicycle is honoured. It also has its place in the cinema! Among the many films on the subject of cycling, we offer you the films that, in our opinion, are not to be missed. Whether you are an amateur, an experienced rider or just curious, no matter what your age, you will find a film you will want to watch!

Let's start with this film from 2011 which, behind the appearances of a simple boy on a bike, deals with a much deeper subject. Cyril, soon to be 12 years old, has only one thing on his mind: to find his father who has temporarily placed him in a children's home. This film, although it offers a lightness and a certain gentleness, is no less moving. Intimate, natural, simple and realistic, the Dardenne brothers manage to create moments of impressive accuracy from which a great humanity emerges.

Let's continue with another genre, this time an American melancholic teen movie. In Bloomington, a small town in Indiana, four working-class teenagers are bored with swimming in an abandoned quarry, fighting and picking up girls. One of them, passionate about cycling and Italy, is going to take part in a race that pits him against students from more privileged backgrounds...  A changeover takes place between young people at the end of their high school years and the very well done cycling race, which gives the viewer an adrenalin rush. A pleasant film to watch.

The oldest film in our selection tells a story set in the 1940s.  The village postman, during a party, watches a documentary about American postmen who use all the means at their disposal to deliver the mail as quickly as possible. The documentary caught his attention, and the village postman, played by Jacques Tati (who also directed the film) decided to go on an American-style tour. 70 years after its first broadcast, the originality of the story makes the film enjoyable to watch, even if some of the postman's adventures are not as funny in 2021 as they were in 1949.

Mrs. Souza's genius idea of giving her nephew a bicycle went far beyond her expectations. Training, a proper diet and the Tour de France was not far away... Neither was the "French mafia", which spotted the future cycling champion and kidnapped him. Madame Souza, accompanied by three old ladies, the Triplettes, who have become her accomplices, will have to brave all dangers in a breathtaking chase. If the synopsis of this film seems a bit far-fetched at first, it is indeed a must-see. Indeed, this animated film, almost devoid of words which at no time prevents the story from being understood, breaks the codes. Retro atmosphere, unusual settings and a notable humour are the keys to the success of this comedy signed by Sylvain Chomet. In this nostalgic depiction of the passing of time, the director adds numerous cultural references such as Charles Trénet, Django Reinhardt and a soundtrack that earned its author, Benoît Charest, the César for best film score.

Played by Benoît Poelvoorde, Ghislain Lambert, born on the same day as Eddy Merckx with an eight-minute gap, is a Belgian cyclist in the 1970s whose ambition is to become a champion. He managed to join a big team but as a water carrier. Determined in his dream of victory and sporting glory, Ghislain Lambert patiently waits for his turn. This film shows with humour the other side of the cycling scene: the harshness of the sport, the adversity of the competitors, but also doping.

Follow the human adventure of François, a Tour de France enthusiast. Fired by his boss and left by his wife, he sets off to ride the Grande Boucle one day ahead of the pros. At first alone, he is soon joined by others, inspired by his challenge. The obstacles were numerous but the rumour of his exploit spread. The media went wild, passers-by cheered him on, the Yellow Jersey of the Tour was enraged. François must be stopped! Fans of the Tour de France will be delighted to rediscover the exceptional landscapes as they follow François' adventure. A character played by Clovis Cornillac who is very endearing, and more generally a film that is both funny and moving!

Let's go now to Saudi Arabia where this film was made. We follow twelve-year-old Wadjda who lives in the suburbs of Riyadh. Although she grows up in a conservative environment, she is a lively girl who wears jeans and trainers, listens to rock music and dreams of only one thing: to buy a beautiful green bike that will allow her to race with her friend Abdallah. But in the Wahhabi kingdom, bicycles are reserved for men because they are a threat to the virtue of young girls. Her mother refuses to give her the money she needs to buy a bicycle. Determined to find the money on her own, Wadjda decides to take part in a Quranic recitation competition organised by her school, with the winner receiving the much-desired sum. This film takes us to a country that has not yet been much exploited in the cinema and tells a touching story pointing out the rights of women in this country without being moralistic. The director, Haifaa Al Mansour, paints a portrait of a courageous, funny, endearing heroine, full of ambition, even if it means breaking the established rules of her country, who will take you with her in the pursuit of her dreams, whatever the cost.

The flying scotsman tells a true story that deserved to be highlighted. The film tells the story of Graeme Obree, the British cyclist who broke a record using a bicycle made from washing machine parts. It was 1993 and Graeme Obree became world champion in the pursuit with his homemade bike. The film tells the story of how he had to deal with the international cycling federation changing the rules that forbade him to use his bike in competitions. Get inside the head of this Scotsman and his technical performance.

Wilee is arguably the fastest and most talented bike messenger in New York. His daily routine is to whizz across the city, dodging speeding taxis, cars, and eight million pedestrians...Yet when he takes on a mysterious fold, the danger is going to be of a different kind. Some people will do anything to get their hands on what he is carrying. What starts as an ordinary express race soon turns into a deadly time trial through the streets of Manhattan... This American film takes you to the streets of New York with an original script that promises breathtaking stunts. The direction is such that you see the scene as if you were there through the eyes of the actor. The immersion is complete and makes the already fast-paced scenes even more impressive and the palpable tension extremely realistic.

If this film appeals to you, the Tous en Selle festival, the film festival dedicated to cycling, will be held on Friday 17 and Saturday 18 September at the Grand Rex in Paris. The film "Coursiers, héros urbain" is on the same theme. Find the whole programme here.

Julie, a cycling star, is two races away from winning the World Cup. This is the culmination of years of effort. Julie loves the spotlight. So do those around her. Encouraged by her coach and her doctor, she has been doping since the age of 14. When her doctor denounces her, she manages to hush up the affair, but realizes the extent of the mess... Abuse. Lying. Betrayal. Caught in a spiral that is beyond her, will she manage to find a way out? A film about doping in women's cycling is a little-exploited theme, which makes La petite reine a very interesting film for those who want to know more about the excesses of cycling. A complete film, which deals perfectly with doping and new cheating techniques by telling the story of a young woman who has been under the influence of her trainer since her teenage years.

The documentary: The Armstrong lie (2013)

Four years after his retirement from sport, Lance Armstrong makes a comeback with the aim of winning an eighth Tour de France. With his camera, Alex Gibney films the backstage of this improbable comeback and draws a strong portrait of this Texan. Through exclusive interviews with the former US Postal leader, his former teammates and the sulphurous Dr. Michele Ferrari, the grey imminence of the Armstrong system, as well as archival footage, Gibney reveals the dual personality of the Dallas native: between exceptional cyclist reigning over the world of the Little Queen and godfather of the biggest doping system in modern sport, while raising the question of doping in sport. A fascinating and disturbing story of a man who wanted to be king and ended up a pariah.

This is a remarkably well-made documentary that tells the story of the man who won the Tour de France many times and lied to the world.  Punctuated by cyclists' testimonies, this documentary enriches the film The Program previously made on the same subject. Recommended for those who want to know the story behind the scenes.

With its eyes on victory, the Movistar professional cycling team embarks on a journey fraught with challenges, scandals and internal conflicts. Follow the 40th season of the Movistar team through a multi-season series with 20-minute episodes.

The philosophy of cycling in the Netherlands: Why we cycle (2017)

Why do we cycle? For the Dutch, cycling is as natural as breathing. You don't think about it, you just do it. In the film Why we cycle, local people and experts from various disciplines explore the effects of cycling on themselves and on society, revealing unsuspected benefits. In Why we cycle we see people of all ages. We see children taking their first rides on their own, we see teenagers going to high school, we meet people who use their bikes to get to work - and who cycle as part of their job - and we see people cycling in their old age to stay healthy. We see them in all sorts of areas, in several cities in the Netherlands, day and night and in bad weather too. Because cyclists are open to their surroundings and to other cyclists, urban life tends to be more open and traffic rules are less strict. Trust between people increases as they cycle. Cycling also allows children to be happy and free to go wherever they want. Why We Cycle shows from many different angles why cycling is so popular in the Netherlands. Talking about why we cycle leads us to embrace wider, society-wide issues.