When is the best time to cycle?

Escape around Nantes by bike

Why making France your holiday destination? 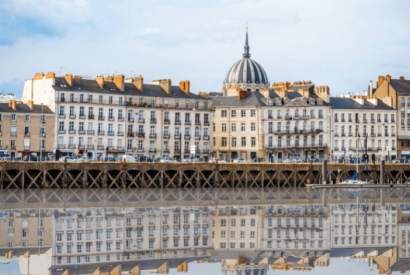 Tracing the history of Nantes thanks to its rich heritage

Vestiges of a distant era, the cathedral of Saint-Pierre-et-Saint-Paul and the castle of the Dukes of Brittany will be a visit not to be missed, the latter being at the origin of the city's nickname: the city of the dukes. You will not forget to take a tour in the medieval district of Le Bouffay. You will find there the Saint-Pierre Gate, vestige of the old city walls, the Apothecary's house, the Place du Change but also many houses with typical architecture of the time in the streets of the Juiverie, the Bâclerie and the Sainte-Croix street. It is also in this district that the Nantes History Museum is housed, retracing the history of the city, from the Edict of Nantes to the great upheavals of the 20th century, including colonial trade and the slave trade.

Nantes was also marked by its importance in international trade, being notably the first French slave port. On the quays of the Loire River, stretches a green promenade lined with 2,000 glass plates. 1,710 remind us of the names of the ships and the dates of departure of Nantes' slave expeditions. The 290 others indicate the slave trading posts, ports of call and ports of sale. A few meters further on, the Victor Schoeler footbridge (under-secretary of state having obtained the abolition of slavery on April 27, 1848) leads you to the Ile de Nantes, the setting for a major urban renewal project, and thus a witness to the contemporary era. The opportunity to see the city from another angle from the François Mitterrand quays.

The city of Nantes will delight lovers of contemporary art: all year round, a green line drawn on the ground takes you to every corner of the city so that you do not miss anything: cultural stops, monuments, works of art ...

The bike in the spotlight!

Impossible not to tell you about it! After all, Nantes is the 2nd most bike-friendly city in France. And for good reason! Nantes has 600 km of cycle lanes and paths and 7,000 bike parking lots. It is also the ideal starting point for a day or weekend bike ride, but also for a few days of hiking! Because Nantes is strategically located at the crossroads of the Vélodyssée (which connects Brittany to the Basque Country along the Atlantic Ocean) and the Loire by bike, two major EuroVélo routes and itineraries for cycle tourism. The ease of travelling by train with your bike in the TER and InterLoire, gives you the possibility to join its itineraries anywhere, or to return to Nantes easily! In any case, the GeoVélo application will be your best ally during your stay!

What would a city be without its culinary specialties? Lovers of sweet or savory flavors, there is something for everyone!

On the sweet side:

On the drink side:

Do not wait any longer and discover the city of the dukes.