> Blog> Visites>From Toulouse to Bordeaux, 270 kilometers of canal by bike

5 micro-adventures to experience along the Méditer

How to adjust your bike?

How many days does it take to cycle the Velodyssée

5 micro adventures to go on in and around Nantes

5 micro-adventures to live along the Vélodyssée

From Toulouse to Bordeaux, 270 kilometers of canal by bike 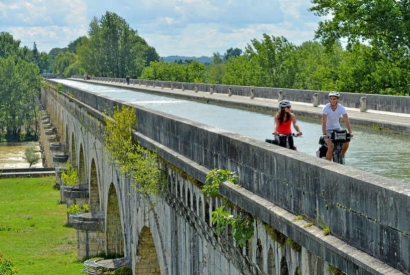 Crossing the South-West of France and linking Toulouse the famous "pink city" to Bordeaux and its historical jewels, the Canal de Garonne, classified as a UNESCO World Heritage Site, is an extension of the Canal du Midi which links the Mediterranean to Toulouse. Through bicycle paths and beautiful country roads, you will enjoy the freshness of the plane tree lanes along the Canal and its locks, discover the Bordeaux vineyards, the medieval villages, the local gastronomy of a general soil. A stay over several days that is perfectly linked with the Canal du Midi, forming a route linking the Atlantic Ocean to the Mediterranean Sea, the famous "Canal des Deux Mers".

For this first day, you will ride on an uninterrupted greenway, safe and quiet; and a little extra not to be overlooked during the summer months: the route is in the shade of plane trees! The adventure begins by leaving behind Toulouse and its rich cultural heritage, its quays, the Capitole and the warmth of the brick. Only the first few kilometers out of the Pink City will be noisy. Soon you will appreciate the calmness of the Canal. Castelnau-d'Estréfonds, a perched village with its Saint-Martin church and Grisolles, a charming brick town, are the first witnesses of your adventure by bicycle. The beautiful Canal of Montech allows you to visit Montauban and its Ingres museum, a 13km long undeveloped but relatively practicable route. On the way, you will cross remarkable sites: the Ponts Jumeaux junction of 3 canals, Montech and its water slope, and the bridge-canal on the Tarn. Finally, Castelsarrasin awaits you with its marina, its abbey and its monastery for a well-deserved meal! 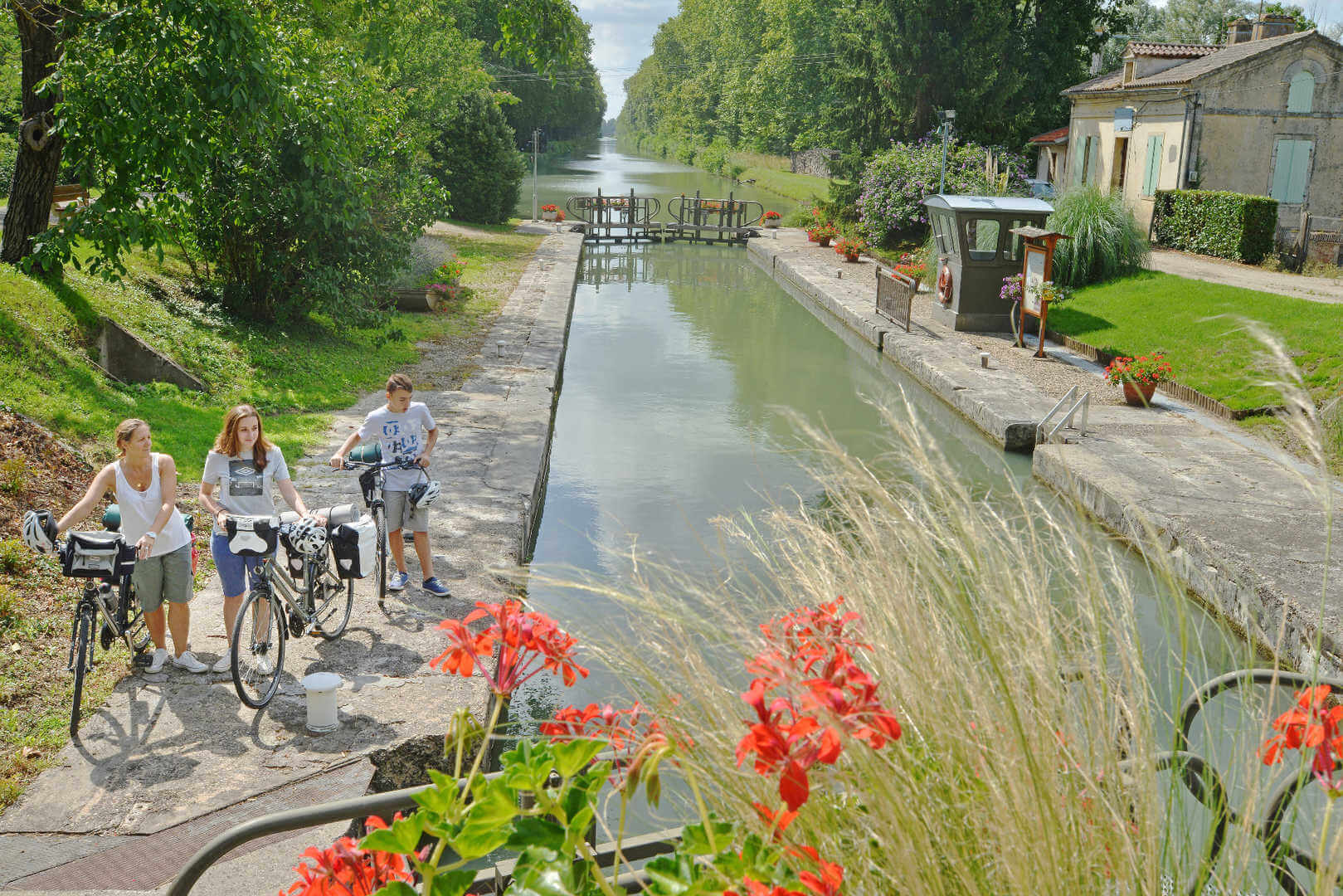 This second stage is placed under the sign of the wonder and the discovery of a remarkable historical heritage. The salutary shade of the large plane trees will accompany you with happiness on most of the route. Moissac, the capital of Chasselas, with its Romanesque art center, its marina, and its abbey, a UNESCO World Heritage Site, await you! Do not hesitate to make a detour to Goudourville to visit its medieval castle. After a few pedal strokes, the city of Valence d'Agen will appear before your eyes. Visit the Bastide of the 13th century or stroll on its marina and enjoy a drink on a terrace in the sun. It is a day during which you take the time to discover: the points of interest are so numerous! Golfech and its power plant nicknamed "la cocotte", Boé and its Cassagne Tower built on an artificial hill or the village of Bon-Encontre and its castle are a must in the landscape. It is by the northern bank of the canal that you will arrive without any trouble in the heart of the beautiful city of Agen.

You leave Agen and its famous prunes by a magnificent pedestrian-bicycle bridge over the Garonne and a bicycle path that runs along the river. From Buzet-sur-Baïse and its double lock which links the Garonne Canal to the river network of the South-West since 1852, many bastides, castles and half-timbered houses accompany you. You can deviate a little from the Canal to visit the villages of Tonneins and Aiguillon, the access will be by little frequented paths, far from the direct axes. Following the Canal again, the route is continuous, easy, and safe with a tricky crossing at the D8 in Damazan. A shady and quiet stage that ends in the Mas d'Agenais. 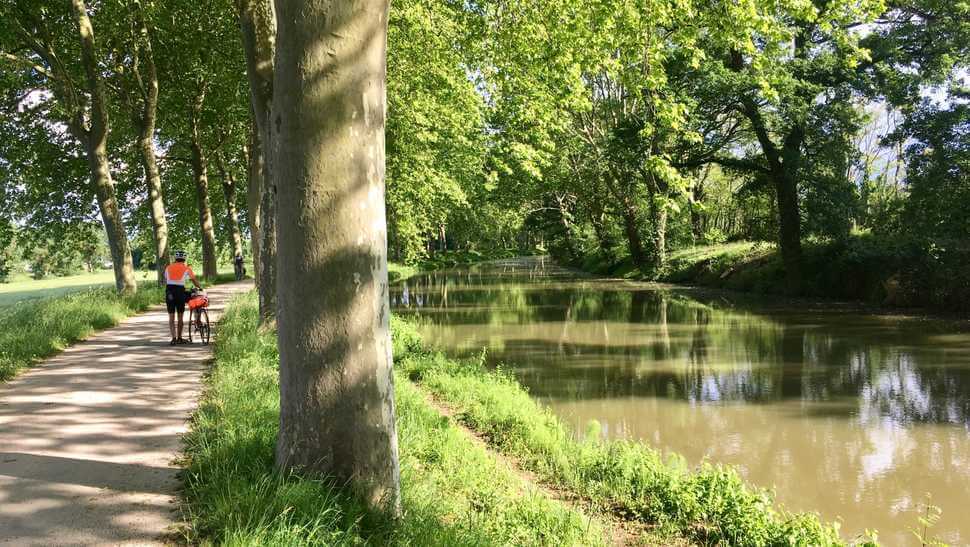 Once your bike is ready, you leave the Dropt valley and the Mas d'Agenais. The day begins with a detour to the magnificent Moulin de Loubens and the Saint-Pierre church, as well as the Benedictine abbey, which is open to the public and has a view of the Garonne. The discovery continues through the villages of Fontet, La Réole and its fortifications, Couthures-sur-Garonne, and its museum and Saint-Martin-de-Lerm. A stage that follows pretty country roads through woods and vineyards.

Without any doubt, you are travelling along one of the most beautiful greenways in France! All the small villages you will cross are full of chapels and churches to visit. The church of Sauve Majeure, the pretty Bastides of Sauveterre and Créon are worth a stop. The layout is excellent, with several break points in Espiet, Créon and Lignan. From the very first pedal strokes, from the vineyard hills not far from Sauveterre to the humid valley, this well-marked greenway winds through varied landscapes. A stage which allows you to finish in beauty on the cycle track of the Entre Deux Mers / green way Roger Lapébie on more than 47 kilometers, a sweet happiness! You arrive quietly in Bordeaux on the right bank bike path of the Garonne on 8 kilometers, quai de la Souys. A city where a vibrant modernity mixes with the jewels of History and the meanders of the Garonne. Take the time to visit, for an evening, the Chartrons district and its magnificent stone facades, the Place de la Bourse or the Saint-Pierre district and its medieval alleys… The end of a sumptuous journey! 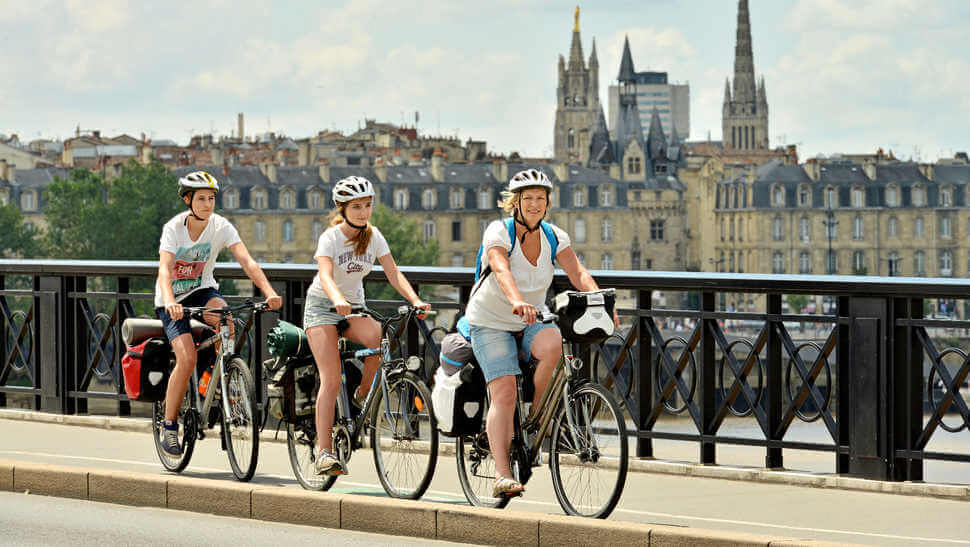