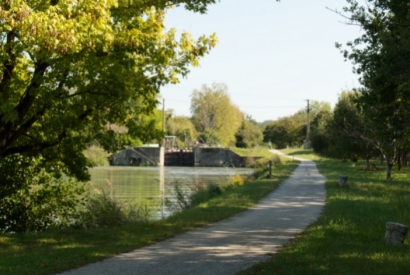 Many of you want to cycle the kilometres of the Nantes to Brest Canal, which starts on the banks of the Erdre, between Sucé-sur-Erdre and Nort-sur-Erdre, and ends not in Brest but in Landévennec, where its waters merge with those of the Atlantic! In order for you to be able to organise yourself as well as possible, you need to determine the number of days you will need to cover the whole of the canal, or just part of it.

First of all, you need to determine your pace:
- Are you used to cycling?
- Are you travelling with children on a bike or in a children's trailer?
- Are you going to ride the towpaths on a muscle bike or an electric bike?
- Do you travel light?
- Do you plan your accommodation in advance or on a day-to-day basis?
- Do you plan to cycle part or all of the canal?
- Do you have any constraints?

Generally, these 8 stages correspond to one day of travel. The number of kilometres can vary greatly from one day to the next, especially for the Rostrenen - Carhaix-Plouguer and Carhaix-Plouguer - Châteaulin stages, as the stages are designed to allow you to stay in the major towns along the route, which are also generally the key points.
In concrete terms, the 8 main stages allow you to cover the 454 kilometres of the Nantes-Brest canal in 8 days. But you can also do an extra stage from Carhaix-Plouguer by stopping at Châteauneuf-du-Faou and then continuing the next day to Châteaulin.

These are recommended stages, but everyone goes at their own pace and according to their desires: if you plan to stop in each town to visit, the number of stages, and therefore the travel time will be higher.
It is therefore up to you to adapt your journey according to your physical condition, your desires and the number of kilometres you wish to cover. Once you have decided on the latter, you just need to go to the France Tourisme website, which allows you to calculate your itinerary according to the number of kilometres to be covered per day. Note that if the terrain is mostly flat, you will have to face positive changes in altitude at the level of Rostrenen and Carhaix, which explains the few kilometres to be covered at this stage, which is the most difficult of the route.