The 20 unmissable tourist sites along the Canal du Midi 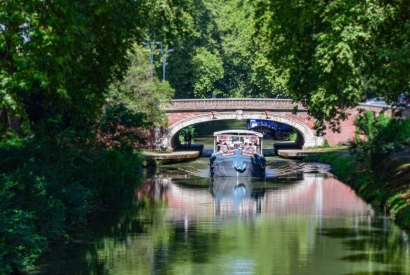 The Canal du Midi, "the most grandiose work of civil engineering since the work of the Romans" (Voltaire), is the royal route of cycling tourism. Cyclists who are experienced as well as families will be delighted by this itinerary. The walk along the Canal du Midi will be marked by the discovery of the architectural heritage and numerous points of interest, not to be missed under any circumstances. Paulette has selected the 20 absolutely unmissable tourist sites on the Canal du Midi.

Ps: of course, this list is not exhaustive and many other points are worth a visit!

2. In the heart of the city, the Radoub basin

In the heart of Toulouse, a stunning landscape is present: the refit basin, which has been hosting since the 19th century, the boats of the Canal du Midi in need of repair in its holds. One of the holds, 30 meters long, is covered and allows you to work on the barges regardless of the weather.

3. One of the last washes of the Canal du Midi, Montgiscard

Between Toulouse and Castelnaudary, at the lock of the village of Montgiscard, stands one of the few washrooms still present on the Canal du Midi. There was a time when there were many washing machines on the banks of the canal since it was forbidden to wash your laundry "outside of the planned washing machines"!

Ayguesives is a town in the Haute Garonne department on the way to the Canal du Midi between Toulouse and Castelnaudary. A well-deserved stop is necessary to observe the Ayguesvivid aqueduct built between 1687 and 1689. Around the lock, there is also a brick factory which has contributed to many works of art of the Canal and a mill. Stop and admire the church of Ayguesives, a Gothic Renaissance building, built in foran bricks in 1500.

Unusual information: The lock of Ayguesives was described by Thomas Jefferson during his trip on the Canal du Midi. However, it was modernized in the 1970s.

The Negra lock deserves a look. This place was one of the stops of the "Barque de Poste", travelers between Toulouse and Agde arrived here for lunch and could find a hostel, a cooler (to refresh the drinks) and a small chapel attached to the lock that allowed travelers wishing to collect it.

6. The water sharing at the threshold of Naurouze

7. Castelnaudary, his cassoulet and his Grand Bassin

At milestone 65 is Castelnaudary. Gastronomic land with its legendary dish, the Cassoulet. You'd be crazy not to stop and enjoy a real, authentic one! Then stroll around the Grand Bassin through the port and the 4 locks of Saint Roch. It is also from the Grand Bassin that you will have the most beautiful view of the city.

It is absolutely unthinkable to bike the Canal du Midi without stopping in the city of Carcassonne! This medieval village overlooking the Canal du Midi is still inhabited and has 52 towers and 2 concentric walls totaling 2 miles of ramparts. You'll be amazed! If you want to take a break before getting there, you will be 2 km from Carcassonne, the Foucaud spur and its landscaped garden.

At the milestone 116, shortly after Carcassonne, you will pass on the Orbiel canal bridge or aqueduct bridge over the municipality of Trèbes. The building has been listed as a historic monument since 1950. A refreshing stop, with your feet in the water?

Small village at the gates of the Black Mountain, on the edge of the Corbières and in the heart of Minervois. Vauban designed a spreader consisting of 11 arches. This system allows the overflow of water from the canal caused by potential weather conditions to be discharged by flowing into the Double Silver River below.

11. In Paraza, the oldest navigable canal bridge in France

The Repudre Canal Bridge is the world's second navigable canal bridge and the first in France. It is also the only canal bridge built by Riquet. The others were, for the most part, added by Vauban.

From the lock of Argens-Minervois to the lock of Fonserannes in Béziers, the Grand Bief (or the Grande Retenue) stretches over nearly 54km, maintaining a constant altitude of 32 meters above sea level: a real technical feat. The Canal du Midi snakes freely between the plane trees, in the middle of the vineyards of two large regional AOCs - Minervois and Saint-Chinian, where a few castles rise. This portion is peculiar by overhanging. Thus, the view of the surrounding landscape is magnificent. In clear weather, you may be lucky enough to catch a glimpse of the Pyrenean massif of Canigou in the southwest and the legendary Caroux in the north.

13. The Cesse canal bridge and the blossoming of the Patiasses

Less than two kilometers from the port of Somail is the Cesse Canal Bridge, a work recommended by Vauban during his inspection tour of the Canal du Midi. For the record, in 1967, a sequence of Robert Dhéry’s film "Le Petit Baigneur" with Louis de Funès was shot in Cesse. Close to the canal bridge, the Patiasses spreader built in 1964 allows the canal to drain excess water. It consists of a large wall of stones pierced with half a dozen openings. On the canal side, adjustable valves allow to supply these products if necessary. The water then flows into a rigole and reaches the Cesse.

14. The Somail and the junction canal to reach the Canal de la Robine

15. After the bridges, the mythical tunnel-canal!

The famous Malpas Tunnel is located in Colombiers. It is a canal tunnel dug in 1679 allowing the Canal du Midi to pass under the hill of Enserune. Riquet chose to carry out this work in order to avoid the canal crossing the Aude and creating navigation problems.

16. The sublime locks of Fonseranes

The locks are classified as Historical Monuments, Great Occitania Site and World Heritage by UNESCO. It is a must-see in the city of Béziers. It consists of a set of locks consisting of 8 oval-shaped basins and 9 doors. Created in 1697, they represent a true technical achievement in civil engineering. It is the 3rd most visited tourist site in Occitania after the Gard Bridge and the Cité de Carcassonne.

The crossing of the Orb has always posed a significant number of difficulties due to the quantity of water in the river - at the lowest in summer, in self-inflating flood. The only solution was to build a canal bridge to cross this capricious river. This structure, located less than two kilometers downstream of the Fonseranes locks, has significantly changed the southwestern outskirts of Beziers. Not only did the original course of the locks have to be changed, but it also created the Port-Neuf and its lock, the only rectangular shape of the entire Canal du Midi. With these new constructions, the city’s economic activity shifted from the west to the south, taking advantage of the junction between the Canal waterway and the railways.

18. Libron books near the seaside resort of Vias

There are several works specific to the Canal du Midi, which are not found anywhere else: the books of the Libron are among them! The Libron is a small coastal river that crosses the Canal, and which usually has a relatively peaceful course and a modest flow. However, its floods are considered violent, and posed, among other things, the problem of the siltation of the Canal du Midi. To solve this problem, a canal-water bridge would have been possible...but because of the proximity of the sea, this solution was impossible. Since 1858, the Libron has passed over the Canal thanks to two diversions of four movable tarpaulins.

19. Architectural excellence, the round lock of Agde

The lock of Agde is a real architectural gem. Round and with three doors, it functions as a modern roundabout for boats to choose between three directions: Thau, Béziers or Agde.

20. La Pointe des Onglous : mouth in the pond of Thau

Located in the municipality of Marseillan, Pointe des Onglous symbolizes the eastern end of the Canal du Midi. The waters of the canal blend with those of the pond. From the small lighthouse at the end of the jetty, an exceptional panorama of Mont Saint-Clair, the Thau pond, oyster parks and the protected port of Marseillan is available to you. The end of a wonderful adventure!