The condition of the haulage paths on the Canal du Midi 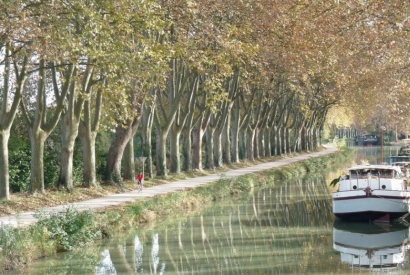 Built in the 17th century by Pierre-Paul Riquet, the Canal du Midi is an unmissable Occitan heritage site, a UNESCO site since 1998 and a place for discovery and recreation. From Toulouse to Sète, the canal allows cyclists and walkers to discover the beauty of Occitanie over 280 kilometers of green roads and haulage paths. The possibilities of itineraries are endless, everyone can choose the distance they want to travel and at their own pace. An experienced cyclist who is trained like a family with young children will find something to his liking. The Canal du Midi bears witness to the genius of those who built it. This route offers all visitors, for a few hours or several days, a path punctuated with remarkable works of art (64 locks and 55 aqueducts in particular!) and walks through villages and towns that preserve the traces of this rich history.

Originally, the boats were towed by human force or by horse coupling. This technique was carried out on a clear path on one of the banks of the waterway: "the hauling paths". Today, they are used by Voies Navigables de France as service roads to maintain and perform repairs on the waterway. They are also a space for cycling tourists. The coating is quite uneven. The 182 kilometers of earth-hauled road can be in some places extremely wide as very narrow, forcing pedestrians to stand and let cyclists pass. In some places, planan roots or gravel require a much less sustained pace. Some difficulties may arise, the hauling path has sometimes disappeared to a road or is partly collapsed due to lack of maintenance. In addition, the haulage path is not always on the same bank of the Canal du Midi. There are a few side changes to watch. While some are obvious, others are slightly less.

For example, with this little guide, Paulette listed all the areas of difficulty and the indications to have in mind to avoid going back on her steps.

In Haute-Garonne, according to the Voies Navigables de France, the paths along the Canal du Midi are perfectly accessible and do not require increased vigilance. However, the condition of the haulage paths in the departments of Herault and Aude requires more attention.

From Castelnaudary to the Mediterranean, here is the list:

From 49 km to 98 km: Naurouze-Carcassonne threshold

km 105: At the exit of Carcassonne-Pont de Conques

- from the lock of Pechlaurier to Bassanel: use the top of the rider (shoreline in bad summer) right-bank;

- from Bassanel to Homps Lock: use the right-bank halting path;

- from the Aiguille lock to the Fonfile lock: use the left-bank halting path;

- from Fonfile lock to Marseillette lock: use the top of the rider (rider);

- from Marseillette lock to RD610 bridge: use the left-bank halting path;

- from the bridge of the RD610 to the effchoir, or even the lock of Trèbes: use the right-bank halting path.

From Toulouse to Marseillan, here are the indications to have in mind for driving along the good free-form paths for a guaranteed tranquility:

Left bank path to Carcassonne. Crossed at lock level, in the center of Carcassonne, near the SNCF train station.

Left bank path to Puichéric, crossed at the Aiguille locks.

Right bank path to Argens-Minervois. Between Argens and Paraza, take two portions of the departmental road drawn instead of the halting path for a total of 1.4 kilometers.

The path remains on the right bank and crosses through a bridge the Canal de Junction de la Robine. Continue straight on the canal and do not take the right channel to Sallèle-d'Aude.

The halting path remains on the right bank until the kilometer point 199: the Malpas tunnel. Pass over the tunnel and find the halting path on the left.

Pass right bank on the point in the middle of the lock ladder, climb right on the bridge over the water slope and reach the Canal Bridge on the Orb right bank (milestone 208). At the 2009 milestone, you will find a bike path on the right bank to Portiragnes (milestone 222).