> Blog> >The history of the Nantes-Brest Canal

Renting a bike on the Canal du Midi but what for?

Rent a bike and discover Béziers and the surroundi

5 ideas for a day's bike hire in and around Toulou 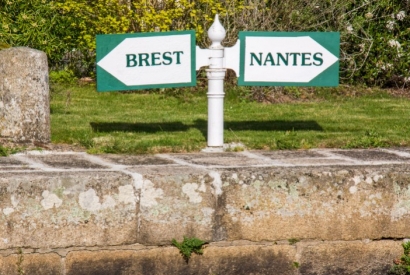 Many of you have cycled the kilometres of the Nantes to Brest Canal, which starts on the banks of the Erdre, between Sucé-sur-Erdre and Nort-sur-Erdre, and ends not in Brest but in Landévennec, where its waters merge with those of the Atlantic! As its construction is one of the most important projects in the contemporary history of Brittany, we have decided to tell you more about this canal, which is now two hundred years old.

The objective of the construction

This immense waterway is 364 km long and crosses the whole of Brittany. Its construction was nevertheless punctuated with pitfalls. The objective, which dates back to the 16th century when the Duchy of Brittany was united with the Kingdom of France, was to remedy the isolation of Brittany, which was at that time cut off from the main communication routes. The aim was to open up the centre of this region and thus to make economic exchanges more fluid in order to deal with the difficult roads in Brittany. Later on, the need to ensure river traffic was added in the face of tensions with the English during the Napoleonic wars, which threatened to close the maritime routes. The numerical superiority of the English fleet meant that the arsenals of Brest and Lorient had to be supplied by an inland waterway linking them to the Loire via Nantes. Although the canal was conceived in the 17th century, work on the construction of the Nantes-Brest canal only began at the beginning of the 19th century under the impetus of Napoleon I. The latter thus opened up the heart of the region by developing 8 rivers to make them navigable by linking them together with the help of canals. To connect the river Oust to the Blavet, Napoleon I had a junction built of about twenty kilometres from Rohan to Pontivy. The presence of the hills required the installation of about fifty locks which were out of the ordinary for the time, one every 370 metres. Pontivy is thus the central point of the strategic device of the Emperor: great commercial city in time of peace and a great cargo in time of war. Until 1815 Pontivy was called Napoleonville.

The work was considerable, the ground was hilly, and the workers, using shovels and wheelbarrows, performed feats of strength. Housed in the Gomel camp, a small town in the Côtes d'Armor, these 4,000 workers, known as the "convicts of the Nantes-Brest Canal", deserters from the royal army during the Restoration, made famous by the story of Jean Kergrist, created the large trench at Glomel to build the canal and allow the Aulne and Blavet watersheds to communicate via the Nantes-Brest Canal. The canal was impounded in 1842.

Navigation on the canal was mainly commercial, used to transport goods to the surrounding provinces. Shortly afterwards, railways were built, which slowed down the number of river activities on the canal. This activity was further impacted by the construction of a hydraulic dam at Guerlédan in 1928, which isolated the Finistère and Costarmoric regions from the rest of the network, thus interrupting navigation as far as Brest.

The tourist vocation of the Nantes-Brest Canal is now recognised, giving it a particular attraction, as much for the diversity of its landscapes as for its major structures.

The construction of the Nantes-Brest Canal led to the appearance of several structures. This is the case of the 236 locks, including the Melneuf lock, the 15th from Nantes, or the series of 15 locks located between Saint Péran and La Pie, stretching over only 4 kilometres. You will also find the Maison du Canal de Nantes à Brest where you can learn more about its history. But the richness of the canal's heritage also lies in its surroundings, the towns full of history that it passes through with their monuments (abbeys, castles), the various museums, the local crafts, and a preserved nature between hedgerows, hillsides and groves.