> Blog> The Canal du Midi by bike>Cycling around Béziers: discover the 9 locks of Fonséranes

The Canal from Nantes to Brest : the best addresse

Choosing a child's bike: what to take into account

The Loire Valley by bike : the best addresses to o

Organise a birthday party on a bike

How many days does it take to cycle the Nantes-Bre

Cycling around Béziers: discover the 9 locks of Fonséranes 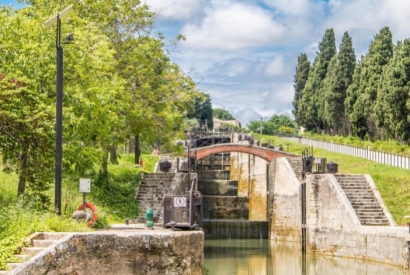 Whether you are cycling around Béziers or on the towpaths of the Canal du Midi, you must discover the Fonséranes locks! This is one of the most impressive structures (if not the most impressive structure) on the Canal du Midi. Built from 1667 by the engineer Pierre-Paul Riquet, the works are numerous and testify to an exceptional ingenuity for a time when the means were not very developed and the concrete non-existent. The feat is such that this scale of locks is still in operation more than 300 years later!

The nine locks of Fonséranes are in fact eight locks in a row and nine basins. The last basin was built to allow boats to cross the river Orb and join the canal a little further on. As for the eighth chamber, which gave access to the Orb, it is no longer usable, as it is too damaged and has not been used for a long time. Indeed, crossing the Orb by the Canal du Midi posed many problems because the river had an irregular flow depending on the season, and it was necessary to find a way to retain the water. Spreaders therefore retained the water inside a channel in order to maintain a sufficient water level for navigation. However, on the other hand, in periods of high water, navigation was complicated.

In 1854, the canal was diverted from its original course from the seventh lock at Fonseranes. A canal bridge over the Orb was built. The Orb canal bridge, also known as the Béziers canal bridge, is currently one of the largest canal bridges in France, measuring 240 metres in length, and has even been listed as a historic monument since 1996.

The Fonséranes water staircase is now made up of seven levels with eight doors. The lock basins are egg-shaped, like all the locks on the Canal du Midi, as they allow the stone walls to better withstand the pressure of the water and thus allow the boats to pass despite the 21.50 metre difference in level. This work bears witness to the great economic and technological development of the 16th century in France, when it was probably the most technologically advanced country in the world.

Today, the 9 locks of Fonséranes are the 3rd most visited tourist site in Languedoc-Roussillon after the famous Cité de Carcassonne, which you can also discover by bike from the Canal du Midi, and the Pond du Gard, the sumptuous remains of a Roman aqueduct.Every year, 300,000 visitors come to admire Pierre-Paul Riquet's work on foot or by bike, and you may be lucky enough to see one of the eight thousand boats that pass through the Fonséranes locks, the largest lock scale in France, every year.

Don't hesitate to rent a bike in one of our rental agencies along the Canal du Midi to discover the locks!