Escape around Nantes by bike 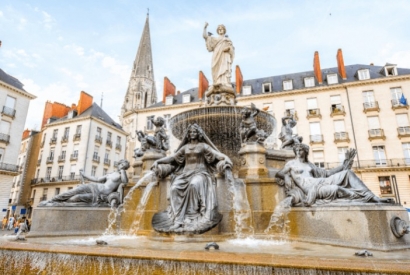 The second most bike-friendly city in France with 600 kilometers of bike lanes and tracks and 7,000 bike parking spaces, Nantes is strategically located at the crossroads of two major cycle tourism routes: the Vélodyssée, the French part of the EuroVélo route n°1, the Alantic Coast Route; and the Loire à Vélo, which opens the EuroVélo route n°6, the Atlantic - Black Sea. The opportunity for you to go on an adventure, in the heart of the city or for escapades in the surroundings, for a day ride or for a ride of several days! So, do not wait any longer and come and enjoy the beauty of the Loire territories! Good to know: it is very easy to travel by train with your bike in the TER and InterLoire. So, you can join the itineraries anywhere, or return to Nantes easily!

The Loire by bike

From Nevers to Saint-Brévin-les-Pins, it is one of the most beautiful cycle routes in France! Pedal through the Loire Valley castles, prestigious vineyards and tourist cellars. Learn more about this wonderful itinerary here!

The Loire by Bike - From Nantes to Mauves-sur-Loire

Round trip itinerary of about forty kilometers on the Loire à Vélo beacons. You pass through the communes of Sainte-Luce-sur-Loire and Thouaré-sur-Loire before arriving in Mauves-sur-Loire. A small town with a rich heritage. This last one hosts a Roman theater, a Gallo-Roman sanctuary as well as the Château de la Droitière, which belonged to Victor Fleury, former mayor of the town and brother-in-law of the writer Jules Vernes who stayed there many times. In the summer, the port's street is transformed into guinguettes with food trucks, refreshment stands and musical entertainment. Return by the left bank of the river. From the Bellevue bridge, you have two choices: cross the bridge and take the same path as on the outward journey or continue on the left bank to the Pas Enchanté then cross the Sengho bridge, the island of Nantes and then the Tabarly bridge!

From Brittany to the Basque coast, the longest road bike in France offers you an exceptional diversity of landscapes. You will cross unavoidable cities and meet emblematic tourist sites. All this accompanied by a rich gastronomy. Learn more about this wonderful itinerary here!

A round trip of 37 kilometers from Nantes to Sucé-sur-Erdre via La-Chapelle-sur-Erdre. You follow the itinerary of the Vélodyssée and enjoy the quietness of the banks of the Erdre river and its small marinas. On the way, you will see some private castles and other manor houses, built between the 17th and 19th century. In La-Chapelle-sur-Erdre, you will stop at the Hesperides garden and the fruit farm of La Hautière. This botanical garden will take you to the land of edible fruits: you will learn about their history and culture. Do not forget to visit the store! Before turning around and heading back to Nantes, take a stroll through the narrow streets of Sucé-sur-Erdre, a charming and welcoming city. At 55 ruelle Tassin, you will find the "Snow White House". A local personality has reproduced the facade of the princess' charming home: a real show! Also enjoy a bucolic walk in the Ganuchaud botanical park, particularly pleasant during the flowering season. Change banks for your return to Nantes at the Jonelière railway bridge.

Still on the itinerary of the Vélodyssée, you ride along the Loire River in the direction of the ocean, through the Canal de la Martinière. Built in the end of the 19th century because of the silting of the river making navigation difficult, it was used by all the boats of the time but was abandoned after 20 years. It will take you to Paimboeuf, known for its starry garden. 73 kilometers after you leave Nantes: Saint-Brévin-les-Pins. Before being damaged during the Second World War - by the way, you can still see the blockhouses left by the Germans on the coast - the city was a fashionable seaside resort. Not to be missed: the Ocean Serpent, a contemporary work of art by the Chinese artist Huang Ying ping.  130 meters long, the skeleton with 135 vertebrae and an enormous mouth appears at the rhythm of the tides. Not far from there, the Saint-Nazaire Bridge, 3 kilometers long, connects the two cities. Unfortunately, it is not really adapted to the practice of cycling. However, solutions have been put in place: free bicycle shuttles, buses, and cabs. You can then return to Nantes by train, from the Saint-Nazaire train station, or by bike for the bravest ones!

From Nantes to the vineyard

The towpaths of the Sèvre river will lead you straight into the Nantes vineyard to the exceptional cellars. It is an "à la carte" route, offering you the choice of the destination:

- Vertou (15 kilometers from Nantes): A rendezvous in the largest wine-growing area of the metropolis with 600 hectares of AOC Muscadet! Not to be missed: the Chaussée des Moines, built by the monks of the Saint-Martin de Vertou abbey around the year 1000. It allows a terrestrial communication between the two banks of the Sèvre river. Return to Nantes by bike or train!

- Le Pallet (25 kilometers from Nantes): On the road leading to the Pallet, you will see the Château du Coing with its typical architecture and retracing different eras between the 15th and 19th century. Arriving at the Pallet, the Nantes vineyard museum welcomes you and offers you to discover the history, the culture, the landscapes, and the know-how of the vineyard. Return to Nantes by bike or train!

- Clisson (35 kilometers from Nantes): You head towards Clisson and cross the road of the Liveau mill, perpetuating its 19th century paper-making activity. It also hosts a museum. You finally arrive in Clisson, where everything reminds you of the Roman countryside: umbrella pines, brick villas, shady gardens, statues ... There is a castle, at the southern entrance of the town, which you can visit. Return to Nantes by bike or train!

From Nantes to the Lake of Grand Lieu

A short walk (19 kilometers one way) that takes you to the lake of Grand-Lieu. After crossing the Ile de Nantes from the city center, you pass Trentemoult, an old fishing village on the banks of the Loire. Then you pedal along the vineyards before arriving in the town of Bouaye, and finally: the lake. A true haven of peace, it is similar to the great African lakes by its extent and its shallow depth. Its fauna and flora are exceptional: it is home to 270 species of birds, 19 species of reptiles and amphibians, 30 species of fish, about fifty mammals, 250 species of plants and 220 species of algae. As such, it is classified as a national nature reserve for the most part but also a regional nature reserve. The Maison du Lac de Grand-Lieu in Bouaye offers an exhibition on the lake as well as a guided tour to the Guerlain Pavilion, which once belonged to the perfumer Jean-Pierre Guerlain. The return trip to Nantes is largely feasible by bicycle due to its short distance, or by train from the Bouaye train station.

Discover the Loire estuary by passing the small village of Couëron, recognizable thanks to its plumb bob tower. Today converted into a cultural space, it is one of the few remaining 19th century industrial installations. At the entrance of the village, you can see La Maison dans la Loire, a contemporary work of art.  It is a copy of the former inn of Lavau, which was stranded on the edge of the marshes. Between nature reserves and industrial heritage, you pedal through the Audubon marshes. Arrived in Cordemais, after 34 kilometers, you will have a panorama of the river from the top of the Villa cheminée. For the return, it can be done by bicycle, or by train from the station of Couëron.

Stay tuned for some new adventures with Paulette !