Why is it a good idea to travel alone by bike?

Paris : Bike rides for the day

The Mediterranean by bike : The reference sites to 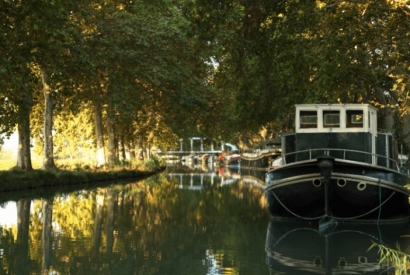 Paulette accompanies you in the preparation of your trip along the Canal du Midi. We have gathered for you the best addresses and tourist sites not to be missed!

You will find below our selection of accommodations along the Canal.

Located in the historical center of Toulouse, you are close to everything: museums, stores, bistros in the shade of plane trees, the Garonne and of course the Capitole Place! Also, enjoy a breakfast with fresh products from the market.

Spend a night on a barge: a must experience during your trip along the Canal du Midi! Take advantage of the terrace and its deckchairs to daydream in the sun after a day of pedaling.

Isolate yourself from the world and spend the night in a tree-top cabin! You will appreciate the enchanting environment of the agricultural estate, bordered by the Canal du Midi, with a view of the medieval city.

Treat yourself to a parenthesis between vineyards and wild olive trees. Finish the day in a hammock, with your feet fanned out. We can already see ourselves there, can't you?

A haven of peace in the heart of Béziers since 1760. You will appreciate the decoration of the villa and the hospitality of its inhabitants.

Ideally located along the Royal Canal, the hotel, wonderfully decorated, occupies a Haussmann-style building. You will have your breakfast in the intimate patio. Authentic place where it is good to live.

Let yourself be charmed by this charming guest house located in the heart of the city, in the historical center facing the Saint-Just-et-Pasteur cathedral.

Here is our gastronomic selection along the Canal du Midi.

On the second floor of the Marché Victor Hugo, you will find a string of restaurants that get their supplies directly from the market's producers. The opportunity to taste local flavors! An advice: think about booking!

A cuisine that smells the South of France and a reputation that goes beyond the borders - even across the Atlantic! You dreamed of a good cassoulet? David's one is to die for!

Friendly table, bistro and seasonal cuisine with a focus on the terroir! An opportunity to savour good food and to learn how to taste it.

A refined cuisine based on local products: meat from the Southwest and fish from the Mediterranean. Vegetarians are welcome!

A refined cuisine inspired by the Mediterranean and its products and putting them in the spotlight. A varied menu that will make you salivate. A must !

Fish, crustaceans, shellfish and seafood: paradise for lovers of the flavors of the sea! You won't miss a visit to the ambassador of Sète specialties.

Among bakers, pastry cooks, cheese makers, butchers, fishmongers and florists you will be able to taste delicious typical dishes of the region, tapas, hamburgers and other delicacies.

Here is the top 10 points of interest of the Canal du Midi according to Paulette!

Located in Toulouse, this is the starting point of the Canal du Midi: kilometer 0. In addition to the moored barges, you will find the Ponts Jumeaux, a set of three bridges, leading to three canals: the Canal latéral à la Garonne, to Bordeaux, the Canal de Brienne and the Canal du Midi, to Sète. You won't miss to have a look at the bas-relief made by François Lucas in 1775.

Located in the commune of Villefranche-de-Lauragais, the Négra lock was an important stop for the Barque de Poste, a passenger transport service along the Canal du Midi. Indeed, it was the stopping point for the lunch, the first "diner". Nearby there is an inn and a chapel, where travellers could gather and which you can still visit. You can also admire a canal bridge, made of red bricks and allowing the passage of a stream, the Thésauque, which will feed the Hers a little further on.

In the commune of Montferrand, the threshold of Naurouze is the highest point of the Canal du Midi, at 189 meters above sea level. A masterpiece of Pierre-Paul Riquet's work, it is here that the waters of the Montagne Noire, conveyed to the threshold by the gully of the plain, divide in two to go either towards the Atlantic or towards the Mediterranean, and this in a completely natural way; thus allowing the Canal to be permanently supplied with water.

An essential stop in the proud capital of Cassoulet. It would be madness not to taste an authentic and tasty one! The digestive stroll will take you to the Grand Bassin, the largest port on the Canal. You will also have the most beautiful view of the city.

This is a must stop on the Canal du Midi! The City, still inhabited, overlooks the Canal with its 52 towers, its 2 concentric enclosures and its 3 kilometers of ramparts. Its millennia of history will fill your eyes!

Former marsh responsible for epidemics, it was drained in the second half of the 13th century, by means of a network of canals dug in the sun, making 420 hectares of land usable. You will have a remarkable view of the pond from the archaeological site of the Oppidum d'Ensérune.

In Colombiers, you will find the Malpas Tunnel-Canal, passing the Canal du Midi under the hill of Ensérune. It was dug clandestinely by Riquet's teams because Colbert, Louis XIV's right-hand man, did not give his agreement.

Kilometers point 206 - The 9 locks of Fonséranes

Classified Historical Monument, Great Site of Occitania and World Heritage of Humanity by UNESCO, it is a necessary visit. Created in 1697, this set of locks consisting of 8 oval basins and 9 gates is a true technical feat in terms of civil engineering.

They are specific to the Canal du Midi, so you won't find them anywhere else. They form a particular structure, allowing the Canal to cross the Libron River, which is subject to flash floods nearly 20 times a year. The two rivers being almost at the same level, the use of a traditional aqueduct was therefore impossible. Since 1858, the Libron has been crossing over the Canal thanks to two diversions of four mobile tarpaulin bridges.

Kilometers point 232 - The round lock of Agde

At the entrance of the town of Agde, there is a real architectural jewel. Thanks to its round shape and its three gates, boats can choose between three directions: Thau, Béziers and Agde.

So as not to miss anything of the treasures of the Canal du Midi, the 20 must-see tourist sites are there.

Stay tuned for some new adventures with Paulette!