> Blog> La Vélodyssée>Rent a bike in Nantes for a weekend, but what for? 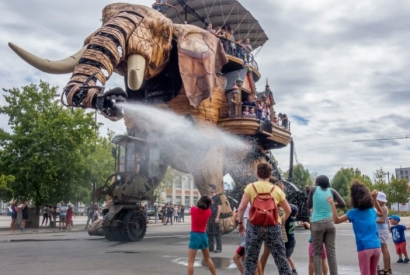 You've rented a bike in Nantes for the weekend to discover the city but you don't know which are the must-see places in the city, nor if it is possible to visit the city by bike? Don't panic, we'll help you! With 600 kms of cycle lanes and plenty of bike parking, Nantes is THE city to visit by bike!

The heart of the city by bike

A simple way to discover the city by bike is to follow the green line set up by the tourist office, it passes right next to your bike rental agency, Paulette Nantes, and will guide you to the key tourist points of the city. Don't hesitate to ask our receptionists in the shop where to reach this famous green line by bike most quickly. Once you have rented a bike, you will enjoy walking through the narrow streets of this city full of history. We advise you to put your bike down and discover the Dukes' castle which overlooks the city. Inside you will discover a museum about the castle, its history but also the city of Nantes, the periods of conflicts and many others. Outside, walk around the ramparts and follow in the footsteps of our ancestors! We also invite you to the Ile de Nantes to discover the machines, the most important activity in Nantes, which is only a few pedal strokes away by bicycle! Pedal again to the Quai des Antilles to discover the rings of Nantes. The ideal time to go is in the evening to see them illuminated, and why not take the opportunity to eat in one of the restaurants on the quays, a wide cycle track all along the quayside allows you to enjoy your cycle ride in complete safety! Then change quays and cycle to the Marquis-d'Aiguillon quay, where you will discover a large mural created by two artists in a shed in the seaport. Cycling past it is definitely recommended! For those of you who are more interested in nature than culture and heritage, don't worry! Go to the Jardin des Plantes: thousands of plant species, flowers of all colours whatever the time of year, a delight for the eyes! Some permanent and original works have even been installed, such as a giant bench inspired by Claude Ponti, an author of children's literature, where sitting on it is actually impossible! We advise you to take a walk in the nursery of Nantes: the Quai des Plantes, the ideal place for a total change of scene in the centre of the city. Stroll through the alleys, rest on a bench and let your thoughts wander. There are so many other things to discover by bike in Nantes that it's impossible to mention everything! It's up to you to lose yourself in its lively streets, let yourself be carried away and leave room for discovery!

Cycling around Nantes for a day

If you have rented a bike for the weekend, you can choose to spend a day in Nantes and allocate the remaining time to a ride around Nantes. There are several choices: either you decide to do a loop and stay around Nantes or you start out on one of the major cycle routes in France, then turn around or take the train. The latter solution will allow you to pedal longer and make the most of your bike. Especially as the various TER and InterLoire trains serving Nantes make it easy to travel with your bikes. You can set off on the Vélodyssée to conquer the Breton lands or discover the Atlantic by bike from Nantes. The Loire à vélo also takes you to Saint Brévin les pins, but you can decide to head for Angers, an equally enjoyable cycling trip!

A day on the bike at Grand-Lieu Lake

Only 20 kilometres from Nantes, this is a destination accessible to all. Grand-Lieu Lake is very famous in the Loire-Atlantique region: as well as being one of the largest natural lakes in France, with the presence of 270 species of birds, it is the 2nd largest bird reserve in France! On the spot, a bicycle route is proposed. Please note, however, that due to its natural wealth, the lake has the status of a "protected nature reserve". Consequently, as the cycle route does not run along the banks of the lake, the ride is not along the water.

Discover the vineyards of Nantes by bike

Discover the surrounding vineyards from Nantes, thanks to the quiet paths along the Sèvre. Once on the banks of the Sèvre, let yourself be carried away and choose the vineyard of your choice from among the various ones on offer. You will find some famous cellars to discover! Here is an example of an itinerary you could follow. You can also cycle from Nantes to the vineyards on your trusty steed.

On the day you can use your rental bike to leave Nantes and reach Saint-Brévin les Pins 60 kilometres further on before returning by train. This is also the route of the Loire à vélo, from Nevers to Saint Brévin les Pins. You will discover Trentemoult, a small fishing village, with narrow streets and colourful houses with gardens mostly suspended to cope with the overflow of the Loire. Pedalling quietly you will reach the Canal de La Martinière, a real haven of peace for cyclists pedalling in the shade of the majestic poplars! Paimboeuf will allow you to take a break in its starry garden before leaving the Loire and merging its waters with the Atlantic Ocean, which you reach when you arrive in Saint Brévin les pins. Charming seaside resort, take time to admire the view of the ocean via the botanical garden and discover the famous Ocean Snake. The return journey can be made by train via Saint-Nazaire station (accessible by bike thanks to shuttles from Saint Brévin les pins).

The Art of the Loire Estuary

Based on the same itinerary from Nantes towards Saint Brévin les Pins, you can, after Trentemoult, at the level of the Ile la Motte, change banks to discover the works of art of the estuary or leave from Nantes on the other bank. You will find the works of art between the village of Couëron and Cordemais but not only. Some artists have hidden their works in the landscape along the banks of the river at Indre and the Red Serpentine. We won't say more! It's up to you to open your eyes wide to discover them! To find them easily, we recommend the Géovélo application, an excellent GPS for bikes.

If you don't want to go to the Atlantic coast but want to venture into Brittany, it's possible! Head north of Nantes to Nort-sur-Erdre, about 37km by bike from Nantes. Follow the Erdre, "the most beautiful river in France" according to François I, on quiet paths, isolated from motor traffic. When you reach Sucé-sur-Erdre, you can take a break in the Ganuchaud botanical park on the river bank. However, don't miss the "Snow White House"! By decorating his house and garden, a local resident transports all the villagers into the world of the fairy tale thanks to a faithful reproduction of the cartoon universe. Get back on your bike and keep your eyes open for the magnificent views and, above all, for the various castles and manor houses, often hidden behind dense vegetation. When you arrive in Nort-sur-Erdre you can turn around and cycle back, take the train back to the town station or even continue to Blain. In this case you will extend your bike ride by almost 30 kilometres. Take into account that the return by train to Nantes is only possible from Savenay, between Blain and Nantes.

Nantes is cradled by the Loire! It is therefore easy to reach it to escape along it, going from Nevers to Saint Brévin les pins, on paths favourable to bicycle rides. It is the same as the Vélodyssée, you choose your direction. To the west of Nantes you can go as far as Saint Brévin les Pins, which is the same route as for the Vélodyssée. To the east you can head towards Angers and join Champtoceaux, a 30 kilometre route along the Loire à Vélo, one of the major cycling routes in France. You will pedal quietly on a marked out itinerary along the vineyard slopes which will allow you to reach Mauve-sur-Loire. Discover the 17th century Saint-Denis Fountain, a listed monument, as well as the Villa de Beaulieu. Champtoceaux, overlooking the Loire, between Anjou and near Ancenis, will offer you beautiful panoramas.

From now on, you have all the keys in hand to make the most of your bike hire!

Find out more about our routes from Nantes:

Nantes - Bordeaux
Nantes-Sables d'Olonne
The Nantes-Brest Canal
Nantes - La Rochelle
Nantes - Pornic
Nantes-Tours
As well as some activities to do in Nantes.